Pursewarden
London, United Kingdom
Author and writer living in London. Six non-fiction books, one of which (published by WIley) has been in the best-seller lists for three years since publication. Various works of fiction including two additions to the immortal "Mapp and Lucia" stories. Currently seeking a publisher for my narrative history of the Plantagenets, which was nominated for a Royal Society of Literature prize.

See my library on Librarything

A Penguin A Week

The Brensham Trilogy by John Moore

John Moore (1907-1967) was a writer who carried the concept of a sense of place to greater heights than perhaps any other in the English language. In his Brensham Trilogy (Portrait of Embury, Brensham Village and The Blue Field) published just after the Second World War, in which he served in the Fleet Air Arm, it is not so much that one is overwhelmed by a strong sense of place as that the place becomes the major character in the story.

Just as Benson's Tilling is a thinly disguised Rye, so Moore's locale is a thinly disguised Tewkesbury, where he spent much of his early life as his father ran an auctioneer's business there. The countryside provides the canvas onto which Moore splashes a whole series of rural characters, and it is their doings, mundane enough in themselves, which form the stuff of the books. Moore is clearly deeply in love with the traditional English countryside, but while his view is unashamedly nostalgic it is also fiercely honest. Many of the local population have no steady employment, and are engaged in an enduring struggle for survival as agricultural odd job men, able to turn their hands to harvesting, working with livestock, hedging or ditching according to the time of year. Weather conditions can be extreme, and creature comforts, other than the occasional pint of beer in the pub, almost non-existent.

Moore depicts a Brensham that is England in microcosm, starting in the Edwardian era and ending after the Second World War. The young men of the point to pointing set join the Yeomanry in 1914 and go off to get slaughtered in France. Their sons do the same thing in 1939, while the few survivors of their fathers' generation form the Home Guard and get ready to repel invaders with knives tied onto broom handles. Without him having to make it explicit, we realise that what we are seeing are scenes that are being played out all over Britain.

It is like watching a television documentary of day to day events unfolding through history, yet without any clear sense of exactly which period relates to which event, a sense that is made stronger by the narrative sometimes jumping around chronologically. This has a secondary purpose as well, since what Moore is showing is that there is a common historical thread running through any rural location. There is constant reference to Shakespeare, the town's three main scoundrels (who nonetheless band together to do their patriotic duty every time war breaks out) are called Nym, Bardolph and Pistol, and fittingly there is an explicit enunciation of this idea right at the end of the last book, when the sons of a man about whom there was little good to say struggle to find words to put on his tombstone. Eventually they decide on "said to be a descendant of the poet Shakespeare".

It is difficult to know exactly how to describe the Brensham Trilogy. In one sense they are not really novels at all, or at least do not read like conventional novels. They are a blend of travel book, memoir, local history and social comment. Yet Moore's love for the countryside and the life of its people is a constant which permeates every page. The dreaded Syndicate, for example, who are forever schemeing to evict people from their homes, come in for rough treatment. So, I will not attempt to analyse it any further. I will simply say that it is one of the most touching and affecting books that I have read for some time, and that reading it one is instantly transported both in time and space. Whenever I look at it on my bookshelves I will smell wet mud and hear the sound of soldiers singing as they march off to war, or perhaps the click of leather on willow as another cricket season gets under way on the village green.

This type of writing was once very popular. Particularly successful examples were A.J. Massingham and W.H. Hudson. However, whereas they portray the countryside, Moore tells a story, albeit the story chiefly of the countryside, and that is an important difference. He is perhaps similar in style to Compton Mackenzie, whom he knew, and to whom the last volume is dedicated. The first, incidentally, is dedicated to the poet Eric Linklater, from one of whose poems an extract runs through the book like a leitmotiv: 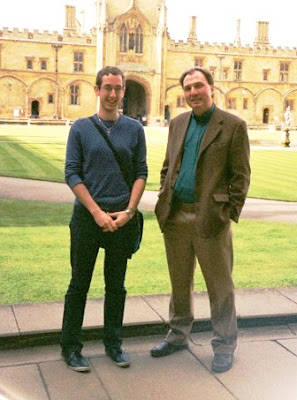 Literary giants Pursewarden (right) and Stuck-in-a-Book (left) met in person at the Sunday Times literary festival in Oxford on 1 April. Luckily the paparazzi were on hand to record the event for posterity.
Posted by Pursewarden at 18:07 No comments:

Clive James, celebrity and getting published

I have recently been reading North Face of Soho by Clive James, which I believe is the fourth in his largely auto-biographical series which began with Unreliable Memoirs. It was, as always with Clive James, a hugely entertaining read, but to my mind none of the successors have had the same impact as that first one, perhaps because it seemed at the time (and indeed probably was) such a different and refreshing book to anything else one had read. I can remember reading it on holiday one year and laughing out loud every few minutes. He is the master of the deadpan throwaway line, a technique I have shamelessly tried to copy in my own writing. I think my favourite one went something like this: "As I got out of her car, I arranged to meet her again the next day. It seemed the least I could do considering I had just been sick in the glove compartment of her 2CV."

I have also been reading The Meaning of Recognition (like North Face of Soho, borrowed from the excellent Swiss Cottage library)and here I have a bit more of a problem. TMR is a collection of essays and I took it out to read because the same author's Cultural Amnesia is one of my favourite books of all time. Frankly, TMR disappoints. CA was a collection of essays on key figures (though some not that well known, at least in the UK) of the twentieth century, and was an example of that wonderful eclectic mix of wit, erudition, insight and humanity that James does so well. It ranged across just about every art form, delved into the big issues of the last century, and was by turns enlightening, funny and touching.

TMR is none of these things. Perhaps it is because he restricts himself largely to the more popular media such as Television, though he also gets into subjects as diverse as contemporary politics and Grand Prix racing. Even the two I thought I would enjoy the most, on Huxley and Flaubert, were strangely unsatisfying. There are some flashes of the old brilliance (a novel, he says, "is a register of the mind's adventures, not of the memory's contents") but far too much of it feels like an old professional journalist knocking out his copy.

While CA would be on my list of ten all time favourite books, it had always struck me that there was an inconistency somewhere in it which troubled me, and it was only on reading something James said about celebrity in TMR, and them something about his own experiences in North Face of Soho which brought it home to me. He is rightly and understandably very hard on aspiring writers who contact him asking if he can introduce them to agents or publishers. Good books will always get published, he avers, since publishers have a whole team of people who do nothing but wade through the "slush pile" of unsolicited manuscripts, and sooner or later quality will out.

With due respect to James as a senior member of the London cultural world, this simply isn't true, and frankly I doubt if it ever was. We all know that Harry Potter was turned down by several publishers (Macmillan are rumoured still to be trying to find out who was responsible for this mega-gaffe at their end), and represents the rule, not the exception.

Fact: unless an author is represented by an agent then most pubslihers will not even return their phone calls or emails, let alone read their manuscript. Fact: publishers do not have whole teams of people who wade through their slush piles, unless an occasional summer intern qualifies. Fact: most publishers no longer even accept unsolicited proposals. Fact: publishing editors for the most part do not even have the power any more to decide which authors they would like to publish. Their sales people tell them what they want to sell, and the poor old editor then has to go out and find it. For the most part, of course, "what they want to sell" means some piece of nonsence ostensibly written by a "celebrity" and/or a "TV spin-off".

James is very hard on the cult of "celebrity" which has grown up around the world of television and rightly draws a distinction between people who are "recognised" in the sense that their face may have appeared on the TV screen from time to time, and people who are "recognised" as being possessed of some unusual talent, or being eminent in their chosen field of study. It was only when I read his decsription of persuading a reluctant publisher to accept his idea for Unreliable Memoirs that the penny finally dropped. If he is honest, he will admit (because he says as much in North Face of Soho) that the only reason the book got accepted for publication was because he was at the time a well known TV celebrity. If he had not been, then he would have been able to experience at first hand the frustration of knowing that you have written a piece of quality work, but that nobody is going to give you the time of day to discuss it, far less to read it.

Recognition comes in many guises, but the sad fact today is that one is unlikely to become recognised as a writer, since in order to become a writer in the first place you need already to be recognised.
Posted by Pursewarden at 17:37 No comments:

Pauline Rowson kindly sent me a copy of Deadly Waters, the second in her series of DI Horton detective stories set in and around the town and harbour of Portsmouth on the south coast of England. I really enjoyed reading this book. The plot is well crafted, there is a good sense of place, and there are some fascinating conflicts within the police establishment which are doubtless to be exploited to the full in future books in the series. If you're looking for a new detective to add to your bookshelves, The Tide of Death, the first in the series, would be a good place to start.
Posted by Pursewarden at 17:34 No comments: